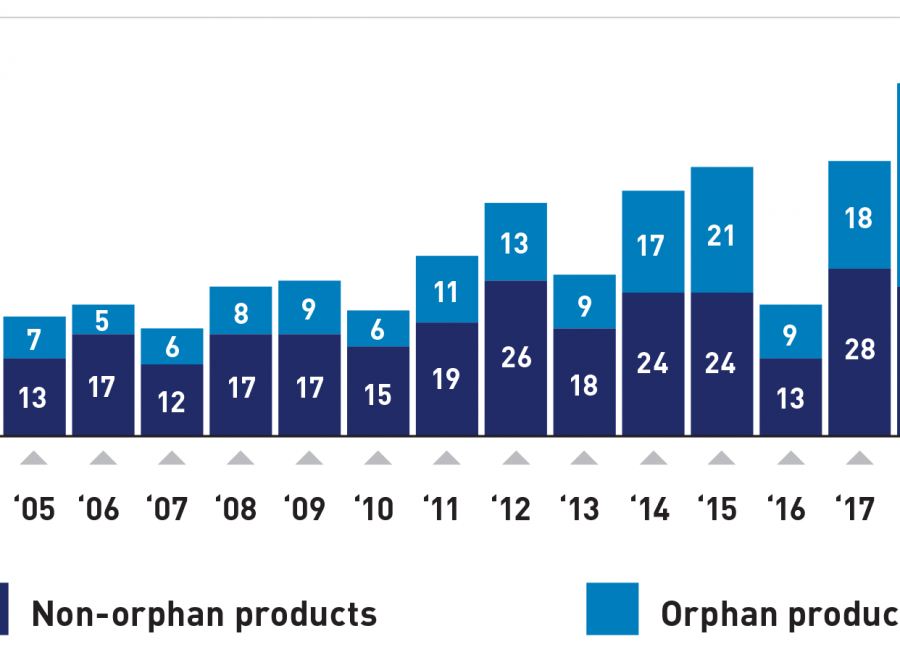 “In 2019, 21 of CDER’s 48 novel drug approvals (44%) were approved to treat rare or ‘orphan’ diseases that affect 200,000 or fewer Americans,” the report states. “Novel drugs approved in 2019 with the orphan drug designation were: Adakveo, Brukinsa, Cablivi, Egaten, Ga 68 DOTATOC, Givlaari, Inrebic, Oxbryta, Polivy, pretomanid, Reblozyl, Rozlytrek, Scenesse, Sunosi, TissueBlue, Trikafta, Turalio, Vyndaqel, Vyondys 53, Wakix, and Xpovio.” One such approved drug, Egaten (triclabendazole), treats fascioliasis, a tropical disease more commonly known as liver fluke infestation. This is the first FDA-approved drug for the disease, which is transmitted to humans by consumption of larvae in contaminated food or water.

Also first-in-class drugs, Scenesse (afamelanotide) is aimed at increasing pain-free light exposure in patients with erythropoietic protoporphyria, and Turalio (pexidartinib) capsules are available for certain adult patients with tenosynovial giant cell tumor. Surgery is the primary treatment for tenosynovial giant cell tumors, but for those who are not candidates for surgery, pexidartinib is now an option.

This treatment “helps prevent the most common complication” of the disease called vasoocclusive crisis, a condition that occurs when body tissues don’t receive enough oxygen.

Padcev (anfortumab vedotin-ejfv) injection was approved under the FDA’s accelerated approval program as an option for patients with refractory bladder cancer. This program “allows FDA more flexibility in what endpoints can be used to approve a drug that offers a benefit over current treatments for a serious or life-threatening illness.” However, subsequent trials must be conducted on these drugs to support full approval. In total, CDER approved 9 of the 48 novel drugs under this program. In addition to approvals for rare diseases, CDER announced in its report the approval of treatments for certain cancers, blood disorders, autoimmune conditions, and heart, lung, circulatory, and endocrine diseases. Treatments for neurological and psychiatric disorders along with infectious diseases were also included in the report.

“These therapies come in the form of novel drugs never before marketed in the United States, other new drugs that add important medical value, already FDA-approved products approved for new uses and for administration to new populations of patients, and new dosage forms of products designed to offer advantages over earlier versions.

More important than the quantity of the new therapies is their medical value and the important new roles these drugs are serving to advance patient care,” the report states. “We trust this report will continue to promote greater understanding of the many ways CDER works to support innovation and improve treatments for patients,” said Janet Woodcock, the director of CDER.