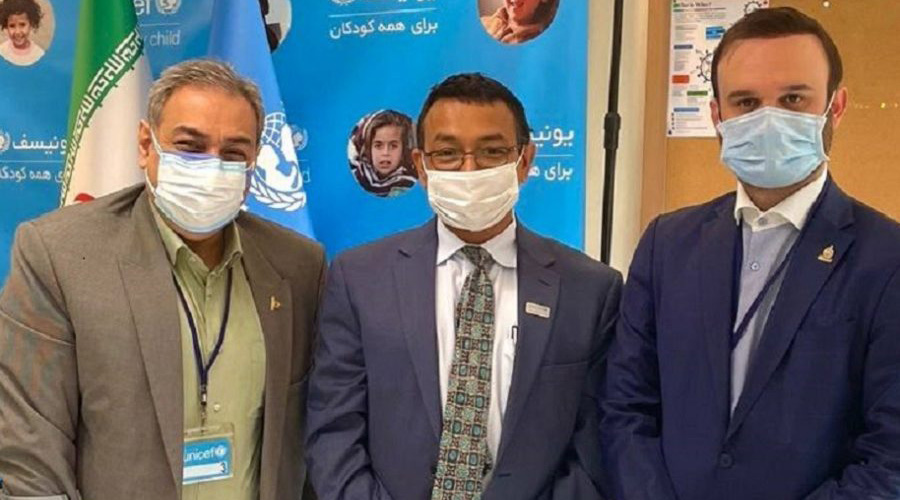 In a meeting  on Monday October 11, 2021 between the Chairman and Managing Director of the Rare Diseases Foundation of Iran (RAADOIR) with UNICEF resident representative in Iran, it was decided to hold a collaborative working group for the right of the Iranian rare diseases children.

During the first meeting session held at UNICEF head office in Iran, Yaser Davoudian, RADOIR chairman stated that there are 355 types of rare diseases identified at RADOIR’s patient registry system (SABNA) and about 3 million rare patients living in Iran of which the most affected populations are the children suffering under dissatisfactory treatment condition, unfortunately.

He also added,” Due to cruelty of the imposed sanctions, lack of access to treatments and orphan drugs as well as not enough awareness and knowledge among the medical and public societies about such life threatening diseases, the Iranian rare children are intensively suffering.”

Davoudian continued,” The imposed sanctions by the American government are against UN human rights policies led to the Iranian rare children’s right abuse and neglect. Yet we at RADOIR as an independent NGO, have made invaluable achievements like development of National Strategic Plan of Rare Diseases in Iran as the 30th country in the world as well as identification the rare patients not only in Iran but the Middle East which have encouraged the countries in the region to apply membership at our foundation.”

He emphasized that up to now, we have not received any fund from any local and international organizations and have been able to successfully keep on our mission despite of the existing sanctions and restrictions. RADOIR chairman added,” We have still many action plans for the rare patients which in collaboration with UNICEF and WHO, hoped to reduce the rare diseases children’s pains and sufferings and this is the least to be enacted by UNICEF and other referral organizations in Iran.”

Yaser Davoudian declared,” We expect UNICEF entities in Iran to meet the needs of the Iranian rare children like others all over the world along with the global heath supportive goals through developing a collaborative strategic plan with RADOIR to find the best solutions, accordingly. We do not intend to meddle with financial assistance or diplomatic policies. RADOIR is asking for the efficient suggestions and facilities at UNICEF to manage the support for the vulnerable rare children in Iran.”

Dr. Hamid Reza Edraki, managing director of the Rare Diseases Foundation of Iran who has been awarded by the Iranian president as the honorary radiologist for 2 years stated, “ At our foundation, we have achieved scientific success in discovering novel advanced methods of Fetal MRI early diagnosis in brain disorders in the first trimester of pregnancy to prevent rare diseases in children.” Dr. Edraki emphasized that the collaboration of UNICEF and RADOIR will be a turning point in improving the living quality of the Iranian rare children and appropriately educating their families as well as the society about rare diseases.

Dr. Robin Nandy, UNICEF representative in Iran explained,” There are different departments at UNICEF as of Health, Education and other issues with children. Our vision is far from the political affairs and our mission is to find the best solutions to cover the problems and sufferings of children to access a better life. Our first and main concern at UNICEF is to achieve the children’s rights and meeting their needs wherever in the world. “

Dr. Nandy congratulated RADOIR board of directors for their achievements especially implementing rare patients registry system to identify rare patients and improve means of supporting them.

At the end of the session, UNICEF representative in Iran stated.” There is a bright new horizon for the Rare Diseases Foundation of Iran. We will ask WHO resident representative and the international department of MOH-Iran bodies to join our think tank session with RADOIR in very near future.”

This meeting was held following the interview session by Kamran Najafzadeh, RADOIR ambassador in Manhattan with Dr. Aboubacar Kampo, Director of Health Programs at UNICEF.